Photo management is a tricky subject because everybody wants to tackle it a little bit differently. Some people organize everything into albums, some delete anything they don’t want to keep, and some would rather skip managing photos altogether and leave everything sitting in a huge collection. The latest release of Google Photos includes some clues that show users will soon have the ability to add a new tool to their organizational belt: archiving photos.

In case it’s not obvious, archiving a photo will work a bit like archiving a message in Gmail – images aren’t deleted, but they won’t be part of the main list of photos anymore, either. Unlike Gmail, archived photos basically go into a separate container separate from the main photo stream. There is going to be a new link in the nav drawer that leads to a page containing your archived shots.

The command to archive images will be in the overflow menu, most likely in both the multi-selection mode and in the solo image viewer. Likewise, images can be unarchived from the same menu to return them to the main list.

Archiving seems like a great solution for those that want to hide imperfect pictures from their photo stream without actually throwing them away.

Based on how the much appears to be complete, I suspect it’s possible the archive feature could launch immediately with a server-side switch. The necessary layouts, menus, and text appear to be there, and there’s code to back it up. Of course, this doesn’t mean the feature is actually complete, just that there’s no currently obvious reason it can’t be activated immediately.

Some new feature were added in the last couple of weeks through server-side changes and app updates. Since they were either ill-timed or added quietly, we didn’t get a chance to cover them as soon as they happened. They still deserve to be mentioned, so we wanted to quickly point them out now.

Some improvements to RAW support

Back in November, the first stage of RAW support turned up in Google Photos. Images in DNG format could be opened and displayed, but only using a file manager or other apps that could trigger Photos to open an image. Even when images were open, there wasn’t much you could do with them. Things are a bit better as RAW files are now detected and show up in the main interface. 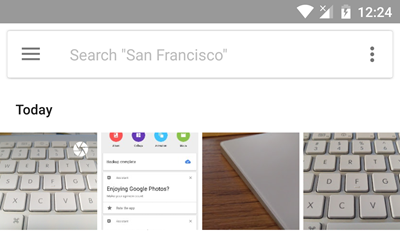 When a RAW image appears in your photo stream, it will have a shutter icon in the top right corner, just like the first image on the left in the screenshot above. Opening an image in the full screen viewer doesn’t add much since the first sighting from a few months ago, but it now includes the same shutter icon next to the word RAW at the top right. 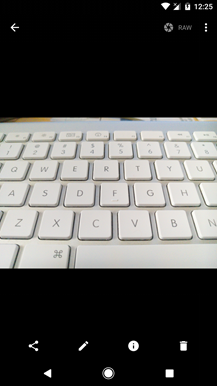 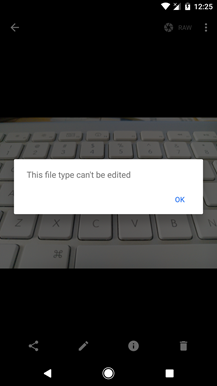 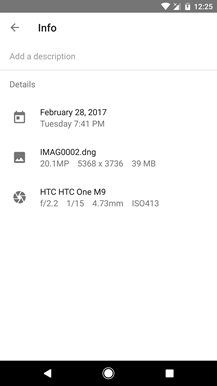 In addition to the info button that has been there since the beginning, there are also buttons across the bottom to share, edit, and delete the image. The button to perform edits is a bit of a red herring – it only displays a dialog box to say the file type can’t be edited. For comparison, here are the screenshots from v2.4. 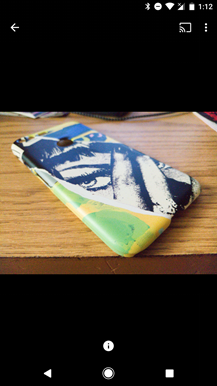 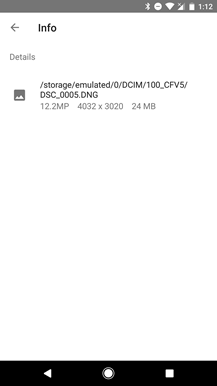 The info box also has a little more actual info in it. The filename has always been there, but it now also includes a date for the photo and details about the camera used to take the shot. This also leads to another important detail…

The info screenshot above shows the photo was taken on an HTC One M9, but the navigation buttons belong to a Pixel phone. That’s because RAW files are now syncing onto Google Photos. No hacks or manual uploading is required, just take a picture in RAW mode and Photos will take care of the rest. Uploading of RAW files has been supported from the desktop for a while, so this isn’t new territory, but it’s still nice to see operating on mobile.

Strangely, there’s no setting that could be used to prevent syncing of these larger files, which would obviously be important to users that have to deal with limited data or running short on Drive storage. Since this appears to have only just been turned on recently, I suspect a setting like this is due shortly, but may have been an oversight. At least, let’s hope that’s the case. 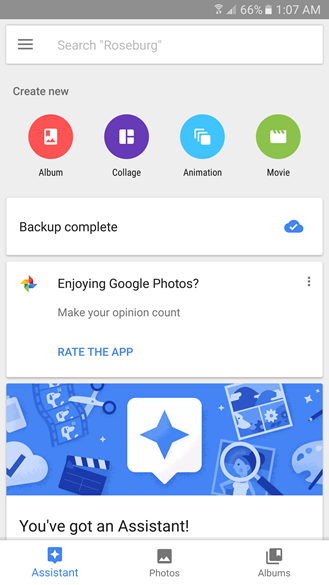 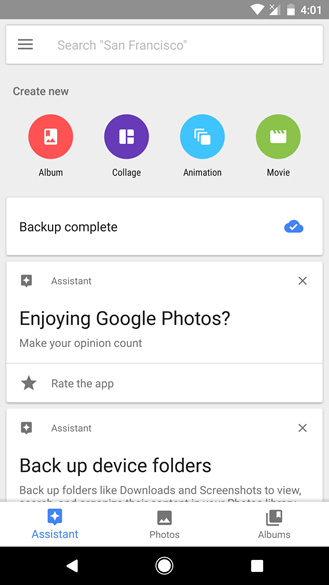 The styling of the cards in the Assistant tab has been revamped a bit. It’s immediately obvious that the title text is much larger and the cards have lost a great deal of color as both icons and links have gone to gray. There are numerous other changes, like switching from an overflow menu on each card to a little ‘x’ to remove it. There are some notable visual changes here, but nothing functional appears to have changed.

WhatsApp Outage: WhatsApp, WhatsApp Web down for thousands of users

Search outside the box: How we’re making Search more natural and intuitive