Exclusive: This is the 2017 Google Pixel “XL,” with low-bezel AMOLED display and squeezable frame

The image you see above is what we believe to be an accurate representation of Google’s 2017 flagship smartphone, the 2nd-generation Pixel “XL.” This image is based on information from sources we deem extremely reliable. For those of you keeping track, this is the codename “taimen” device.

We rate this rumor a 8 out of 10 on our confidence scale. The reason we are subtracting two points is due to the fact that we are not confident our source material reflects a fully finalized design. As such, there is a possibility that small changes may still occur before the phone makes it into production, as we don’t expect Google to announce this device before October. Still, we are exceptionally confident that this image represents the overall look and feel of Google’s new smartphone, even if some small elements may not end up being representative of the final product.

Note that this is the larger Pixel device. We do not have any information about the smaller phone for 2017. 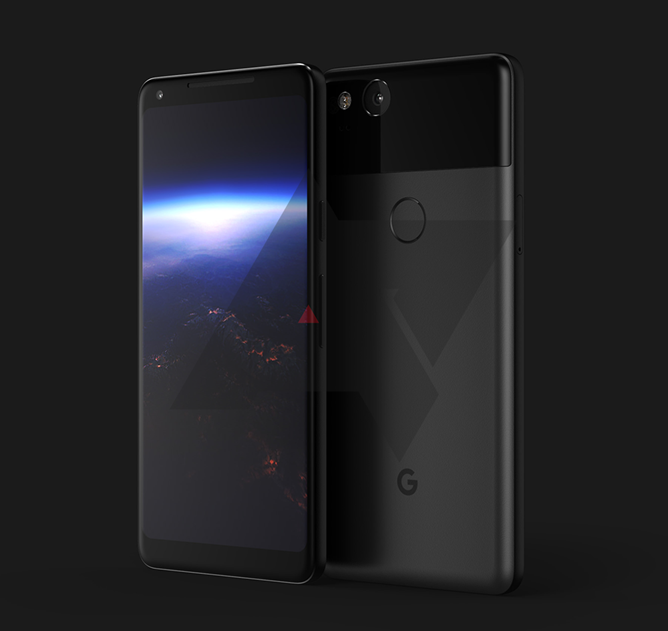 You’re staring at it. This new design, while evoking the theme of the first-generation Pixel XL in some very clear respects, is also a very substantial departure from that phone, as well. Our sources indicate LG is the manufacturer, as has been previously rumored. If you’re curious about specifications, I would say XDA’s leak a couple of weeks back sounds pretty plausible.

The rear of the new XL is curved like last year’s phone, though perhaps with sharper corners this time around. The fingerprint scanner now sits below the glass  “window” at the top of the phone, as opposed to inside it, likely because the window itself seems substantially smaller than the one on the 2016 XL.

It’s unclear based on our imagery if the new XL’s camera is perfectly flush with the glass window as on last year’s phone, but the silvered ring around the lens cover suggests to me that it may stick out ever-so-slightly, which isn’t the best, but far from a deal breaker visually. Gone is the lower body antenna band (perhaps blended to match the body color?), and the phone doesn’t appear to have any noticeable antenna bands anywhere that I can see. It’s possible they’re just cleverly hidden – I wouldn’t hold my breath on a completely “bandless” phone.

Moving to the front, we see the star of the show: an LG-made AMOLED display 6″ across at a 2:1 aspect ratio with minimal bezel and rounded corners. It gives the next-generation XL a much more modern look, putting it firmly alongside phones like the LG G6 and Galaxy S8 that have sought to increase display size without sacrificing on ergonomics, by lengthening the panel and dramatically reducing the amount of bezel on the front of the device. Google doesn’t quite take it to the full-on Samsung level here, but I still think this is going to ensure the new XL doesn’t look behind the curve on smartphone design in 2017. The “3D” glass effect is also much more pronounced on this phone, though don’t go confusing that for a curved display – the screen itself is flat.

We can see a very wide speaker grille at the top, as well as the front-facing camera. It’s unclear to me if this speaker will be used in tandem with a bottom-firing driver, HTC-style, to create a “stereo” effect, but it wouldn’t surprise me. As to the headphone jack, we’re not really sure what the status of that is, unfortunately.

In regard to the smaller Pixel, I tend to think it’ll be largely unchanged versus the current Pixel, with the new “XL” representing the cutting edge of Google’s engineering and design efforts, while the smaller device will act as a sort of entry-level option.

We have no information on pricing or an exact release date at this time. In fact, we don’t even know if this phone will be called the “Pixel XL.” It could be the Pixel 2 XL or some sort of variation on that, or just be the Pixel – these things usually to get finalized pretty late, and given the lack of any physical Pixel branding on the phone, Google can afford to take its time deciding on a product naming strategy. We’re calling it the “XL” for the sake of ease of understanding here, not because we specifically have information suggesting Google is retaining that naming convention.

Finally, we believe that the new Pixel XL will have a “squeezable” frame a la HTC U11. The same technology utilized in that phone will allow Pixel owners to squeeze their handset to interact with the Google Assistant in various ways (primarily). Hopefully Google’s take on this is a little better to use in practice than HTC’s – I can’t say I was a fan of Edge Sense