Usenix Enigma It has been nearly seven years since Google introducedtwo-factor authentication for Gmail accounts, but virtually no one is using it.

In a presentation at Usenix’s Enigma 2018 security conference in California, Google software engineer Grzegorz Milka today revealed that, right now, less than 10 per cent of active Google accounts use two-step authentication to lock down their services. He also said only about 12 per cent of Americans have a password manager to protect their accounts, according to a 2016 Pew study.

We polled El Reg readers on Twitter just before we published this piece, asking: “What percentage, rounded to nearest integer, of Gmail users do you think use two-factor authentication?” Out of 838 followers who responded within the hour, 82 per cent correctly selected less than 10 per cent. The rest picked more than 10 per cent.

The Register asked Milka why Google didn’t just make two-factor mandatory across all accounts, and the response was telling. “The answer is usability,” he replied. “It’s about how many people would we drive out if we force them to use additional security.”

Please, if you haven’t already done so, just enable two-step authentication. This means when you or someone else tries to log into your account, they need not only your password but authorization from another device, such as your phone. So, simply stealing your password isn’t enough – they need your unlocked phone, or similar, to to get in.

Google has tried to make the whole process easier to use, but it seems netizens just can’t handle it. More than 10 per cent of those trying to use the defense mechanism had problems just inputting an access code sent via SMS.

What if you don’t have two-step authentication, and someone hijacks your account? Well, Google is on the look out for that, too. 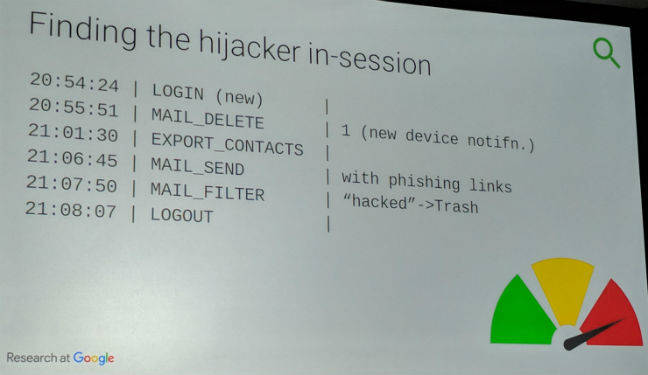 To spot criminals and other miscreants commandeering a victim’s webmail inbox, the Chocolate Factory has increased its use of heuristics to detect dodgy behavior. A typical attacker has a typical routine – once they manage to get into an account, they shut down notification to the owner, ransack the inbox for immediately valuable stuff like Bitcoin wallet stuff or intimate photos, copy the contacts lists, and then install a filter to mask their action from the owner.

By looking out for and alerting folks to these shenanigans, Google hopes to make account hijackings less commonplace. But, given netizens’ lack of interest in security, warnings about suspicious activity are unlikely to get people moving to protect their information. ®

Share
Amazon Go, a high-tech version of a 7-Eleven, will finally open on Monday — with no checkout lines and no cashiers Previous post
How to Create a Professional Quality Logo with DesignEvo Next post