YouTube rolls out a new, simplistic ‘Up next’ screen

When you’re bored and want to be entertained, YouTube can be a great way to keep yourself busy. Indeed, even when you’re done watching a video, the app will automatically suggest related content to keep you hooked up. The screen showing you what’s next has just been updated with a new one, as shown above.

Compared to the previous design (shown below), the new one is now overlayed over the video that finished playing. This is quite different from the former approach, which would instead fill the entire screen with the next video’s preview. The refreshed layout is questionable, though, as there’s a lot of empty space at the top and on the right of the screen. The countdown is also much compact and displayed in the upper right corner, while it used to be a progress circle surrounding the play icon. The latter is smaller and oddly placed, which will probably trigger accidental touches. 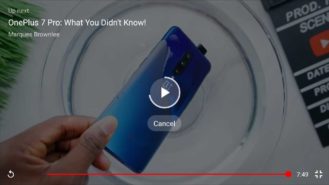 The new layout appears to have rolled out through a server-side switch, as the latest version was released three days ago. If you don’t see it yet, you can try manually updating YouTube using the link below, or downloading the latest build from APK Mirror.