Uber announced quarterly results Monday that beat analyst estimates on the top and bottom lines for its third quarter of 2019. But the stock fell as much about 5% after the company reported over $1 billion in net losses.

Here are the key numbers:

Uber reported a net loss of $1.16 billion for the quarter, topping its $986 million loss during the same quarter last year. The loss includes $401 million in stock-based compensation. In an interview with CNBC’s Deirdre Bosa Monday, Khosrowshahi said the company is targeting adjusted EBITDA profitability in 2021.

“We know there is the expectation of profitability, and we expect to deliver for 2021,” Khosrowshahi said.

Later, on a call with analysts, Khosrowshahi addressed the trade-offs Uber will have to take to reach profitability. “The focus really is to drive lower rates based on the best technology out there rather than driving the growth through discounting,” he said, giving the example of a shift from steep discounts on shared rides to focusing on new features that let users save by waiting longer or walking to a pickup location.

Khosrowshahi stressed that efficiency and profitability are now priorities, while rapid growth was the focus in the past.

Uber raised guidance for its full year 2019, saying it expects adjusted net revenue to accelerate in the fourth quarter. The company bumped its guidance by $250 million, saying it now expects an adjusted EBITDA loss of $2.8 billion to $2.9 billion for the year.

The company reorganized its internal structure during the third quarter and provided results for its five operating segments: Rides, Eats, Freight, Other Bets and Advanced Technology Group (ATG) and Other Technology Programs. Uber will no longer report metrics for its core platform as a result, the company said. 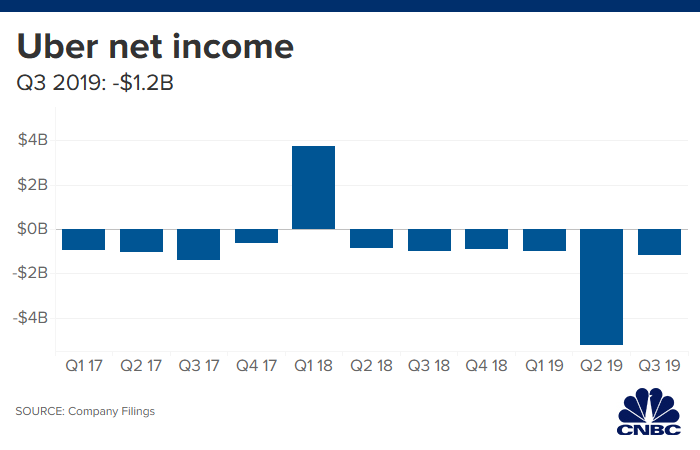 Uber fell short of estimates for gross bookings across its services, reporting $16.47 billion compared to estimates of $16.7 billion, according to Refinitiv. Uber reported 103 million Monthly Active Platform Customers (MPACs), or the number of unique customers who completed a ride or received a meal delivery on the platform at least once in a month on average over the quarter. Analysts expected MPACs to reach 104 million, according to Refinitiv. The company’s take rate, calculated as the adjusted net revenue as a percentage of gross bookings, topped analyst estimates of 20.2%, coming in at 21.5%.

Uber has unrestricted cash and cash equivalents of $12.7 billion, the company reported, up $0.9 billion from the second quarter of 2019. The company said it secured more cash through selling $1.2 billion of senior unsecured notes and closing a $1 billion investment in ATG.

Khosrowshahi began the analyst call defending Uber’s California ballot measure with DoorDash and Lyft aimed at combating a law that would make its drivers employees rather than contractors. He later answered a question about how new minimum pay laws and vehicle caps in New York City have impacted the business, saying increased prices have slowed trip growth in the region but it shows Uber “continues to grow and is resilient to the environment around it.”

Uber’s stock lockup is also set to expire this week, meaning many employees will likely be cashing in their shares soon. On the call with analysts, CFO Nelson Chai said the company has had “good and constructive dialogue with long term shareholders,” but ultimately doesn’t know what will happen to the stock on Wednesday.