Google Lens is an incredibly powerful tool already — just point your camera at an object of interest around you and it’ll offer you search results depending on what it recognizes. It also makes text it sees machine-readable, letting you call phone numbers and solve simple math problems. Google is apparently looking to expand the latter capability, as APK teardowns conducted by XDA Developers and 9to5Google have found. You might soon be able to point your phone at math problems and get some help to solve for x.

The first evidence of the feature popped up at the end of March in Google beta version 11.3, when code surfaced that showed the company preparing an Education mode for the app. When you select it, you’ll be able to point the camera at a “homework question” to get assistance. Further strings in the code suggest that this will help you with math problems in particular. While it was possible to activate the corresponding interface back then, the feature itself wasn’t functional yet. 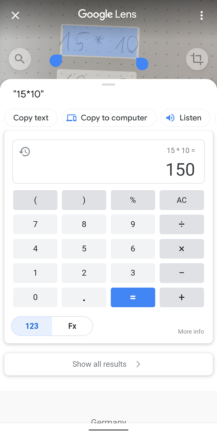 It appears that Google is now closer to finishing the math solver, as spotted in the latest beta by XDA Developer’s Mishaal Rahman. He managed to activate the Education mode and scanned a simple 5+5 equation. The results list the question itself and offer solutions from the web, linking to resources like Wolfram Alpha, MathPapa, and Cymath. It remains to be seen with which more advanced equations the tool will work exactly, but it would make sense for Google to build out the feature to help with more complicated questions like “Solve for x.”